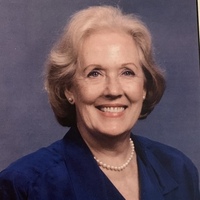 June Huston , 92, passed away peacefully on January 29, 2021, after a long illness. She leaves behind an incredible legacy of love.

June was born in Johnson City, TN, on September 16, 1928, to William Dewitt Rose and Nancy Parrot Rose. She grew up in Johnson City until moving to Knoxville, TN, to attend the University of Tennessee. There, she met her husband to be, Virgil H. Huston, and was an active member of the campus community and her sorority Delta Gamma, some members of which she kept in touch with her entire life.

June and Virgil were married on September 2, 1948, at the First Baptist Church in Knoxville. From then on June's worldwide adventures began that took her all over the United States, Hawaii, South Africa, and Japan to live, as well as extensive travel in Europe.

All along, she was the best wife, mother, grandmother, and great-grandmother one could ever hope to have. She was a model in Charlotte, NC, and a hostess of rare ability in supporting Virgil's business career. She was an incredible cook and her holiday feasts were legendary within the family, including her peppermint delight that was demanded by all during Christmas. In later life, she wrote a cookbook so we would all have our favorite recipes forever.

June was also an accomplished artist and seamstress. Among her many works are included a hand stitched Hawaiian quilt she was offered thousands of dollars for. In Japan, she took up Byobu screen painting with flowers as her main subjects. June was an avid gardener who specialized in flowers.

The peak of her artistic ability was expressed in photography, both black and white and color. She had her own darkroom for many years after retirement in South Carolina where she produced some amazing work. Her favorite subjects were her dogs and family members, as well as color pictures primarily of flowers. We all remember the green sweatshirt pictures one Christmas.

June was loved by everyone who met her, every bone in her body was kind and caring. She is preceded in death by both her parents, her only brother, and her husband of 70 years, Virgil.

June will be missed, but heaven has gained a new angel. A Graveside Service and Interment for Mr. and Mrs. Huston will be Friday, April 2, 2021, 11:00 A.M. at Jacksboro Cemetery in Jacksboro, TN. Donations in lieu of flowers may be sent to the Jud C. Hickey Center for Alzheimer's Care, a local charity in Augusta, GA.  Online condolences for Mrs. Huston may be made at www.waltersfuneralhome.net.  Walters Funeral Home of LaFollette is honored to be serving the family of Mrs. June Huston.

To order memorial trees or send flowers to the family in memory of June Huston, please visit our flower store.