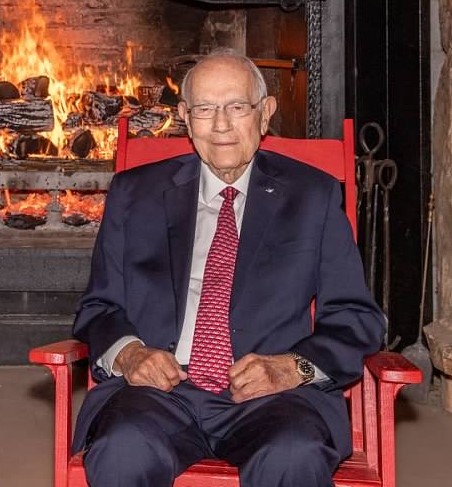 Mr. John T. (Jack) Reynolds passed away peacefully at home on Friday, December 24, 2021. He was born in LaFollette, TN on November 22, 1929.  Mr. Reynolds was a life-long resident of Campbell County except for the time spent at college and in the US Army. After graduating from LaFollette High School in 1947, he began his college education at Carson Newman University. Two years later, he transferred to Bowling Green College of Commerce (now Western Kentucky University) where he graduated in 1951 with a Bachelor of Science in Business Administration. From there, it was off to the US Army. His time in the Army included service in Panama and Labrador, Canada.

After his military service, he started work in 1953 at Peoples Bank of the South and began a 68-year career in banking. His leadership positions include Executive Vice President, President, Chief Executive Officer, and Chairman of the Board of Directors. Due in large part to Mr. Reynolds leadership, Peoples Bank celebrated its 104th anniversary in May. The Tennessee Bankers Association recognized Mr. Reynolds as Leader in Banking Excellence. The bank has been a key supporter in this county for school teams and organizations for as long as anyone can remember, and in August 2021, the football field at Campbell County High School was named in his honor.

Mr. Reynolds was recognized as the Boy Scouts of America’s Campbell County Good Scout Award recipient in 2017. He is also a life-long member of the First Baptist Church of LaFollette and served many years as a church deacon.

Funeral Services Monday, December 27, 2021, 6:00 P.M. at LaFollette First Baptist Church with Dr. Bob Brown and Rev. Phil Fischbach officiating.  Visitation will immediately follow the funeral service in the LaFollette First Baptist Church Family Life Center.  Family and friends will meet Tuesday, December 28, 2021, 10:30 A.M. at Walters Funeral Home and proceed to Woodlawn Cemetery for 11:00 A.M. Graveside Services with Full Military Honors conducted by the Campbell County Honor Guard.  The family respectfully requests that in lieu of flowers, memorial contributions be made to a charity of your choice. Online condolences for Mr. Reynolds may be made at www.waltersfuneralhome.net.  Walters Funeral Home of LaFollette is honored to be serving the family of Mr. John T. (Jack) Reynolds.

To order memorial trees or send flowers to the family in memory of John T. (Jack) Reynolds, please visit our flower store.